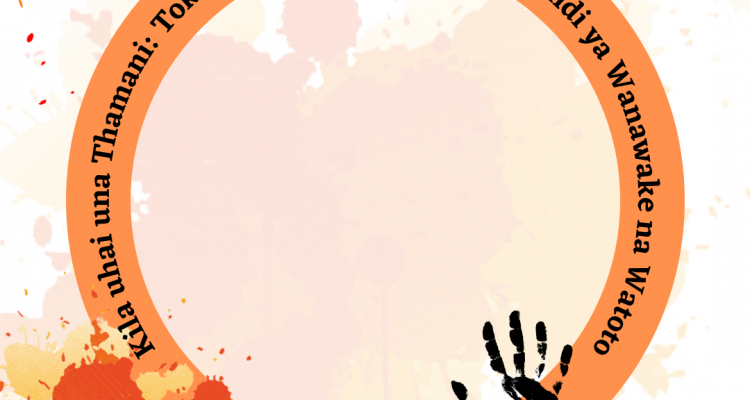 From 25th November to 10th December, Tanzania will join other countries in the world to commemorate the 16 Days of Activism Campaign Against Gender Based Violence. launched by the Centre for Women’s Global Leadership (CWGL) and feminists from around the world at the first Women’s Global Leadership Institute in 1991, has been used worldwide to call for the elimination of gender-based violence (GBV).

In Tanzania, WiLDAF and GBV MKUKI Coalition in collaboration with the Government, UN Agencies and Development Partners, have been the central point of coordinating the campaign since 1996. From such period to 2021, the campaign has proved effective in mobilizing actors across all sectors and cadres towards concerted efforts to eliminate GBV.

Learning from achievements amassed in the past campaigns, this year campaign calls for actions to increase awareness, galvanise advocacy efforts and share knowledge and innovations to end VAWG once and for all. As such, the 2022 campaign’s vision of success is; increased activism (from grassroot communities to national levels) to address GBV because it is preventable.

While the global theme under Rutgers Centre for Women Global Leadership is ‘Take Action to Prevent Femicide Against Women’; the UN theme under United Nation Secretary General Unite Campaign to end VAWG is ‘UNiTE! Activism to End Violence against Women & Girls’. Building on these two themes, WiLDAF in collaboration with GBV MKUKI Coalition will develop theme that fits into our context by blending the two themes and calls for concerted efforts to address femicide. Recent reports indicates increased number of femicide in the country. As we awaits for comprehensive reports on this, the country is developing the new National Plan of Action to End Violence Against Women and Children (NPA-VAWC). The 16 days of Activism Campaign this year provides an opportunity for Civil Society Organizations (CSOs) to join efforts and advocate for new interventions and thematic areas that were missing in the previous plan in particular those which address prevention.

This year campaign will continue using colour orange to represent a brighter future, free from violence against women and girls, since GBV is preventable.

Derived from the UNiTE global campaign, the 2022 campaign objectives include;

Key principles of this year’s campaign advocacy are adopted from the UNiTE campaign as follows;

This year campaign employs wide range of strategies to ensure maximum number of communities are impacted.

The kick of the campaign will be on 25th November in Dodoma with the movement expanding to all regions across the country. The aim is to inspire every individual and institution to take part in this year’s campaign from local to National levels.

Throughout, the campaign will make good use of media and social media to mobilize masses to take part in the movement. The campaign will produce and air programs on ending GBV across the country. We will use national and local TVs and Radio Stations to ensure no one is left behind. On social media the campaign will employ influencers to popularize campaign agenda amongst online communities. In addition to that we will develop memes, cartoon (Vibonzo) to trigger online conversations around GBV. Moreover, the campaign will organize and host talk shows through Clubhouse, Twitter Space and Instagram Live.

At the community level the campaign will strengthen local organizations to devise and implement their own programs to commemorate the campaign at different zones. We are anticipating these activities to transform into yearlong initiatives to end GBV at the grassroots communities.

In addition to that, this year campaign will invite abstracts and policy papers from different individuals on what works to prevent violence. The idea is to promote the role of researches in GBV programming.

The campaign will also create platforms for mutual learning and experience sharing to strengthen capacities amongst stakeholders for effective programming of interventions to end GBV across all levels.

The campaign will connect national level activities to the grassroots levels whereby GBV MKUKI Coalition members who will be organizing activities at the grassroots levels will be sharing reports and activities daily to ensure the campaign visibility. This is a necessary step that will create interconnectivity with the progress made in rural areas. In order to implement this tactic, a 16 Days calendar will be created in order to follow and track the activities done at the national campaign and the grassroots level. The progress made in the rural areas the previous day will be shared every morning to keep track of the situation with the use of digital innovations such as media outlets and videos, which are designed to keep everyone connected and to create campaign visibility. The idea behind this is to ensure that no one is left behind .

2022, marks 25 years since the establishment of the Tanzania Chapter of the Women in…